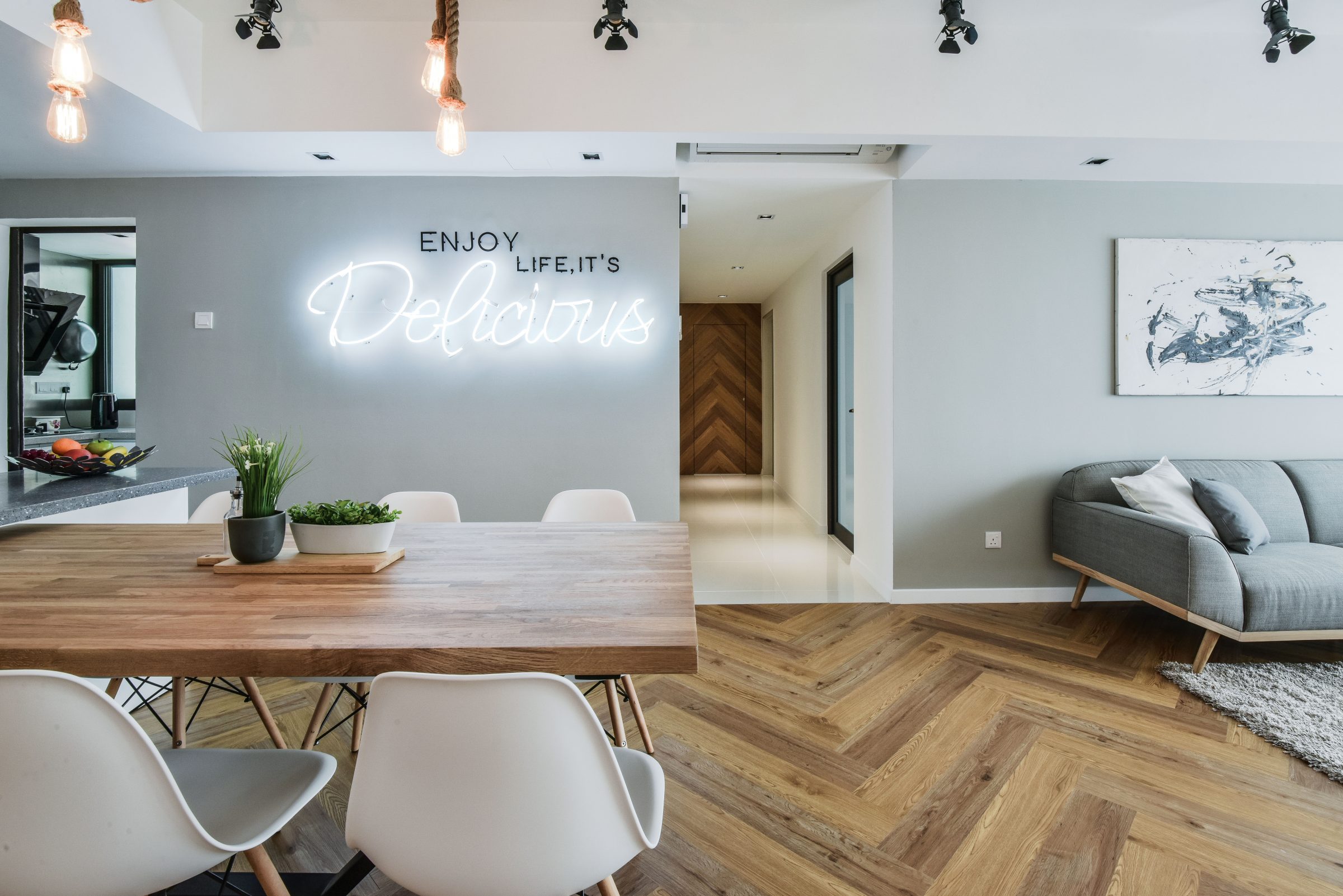 Decorated by the Surface R interior design firm, this condominium presents a simplistic arrangement of minimalist designs, upcycled materials, and decorative features – some which were seemingly transported from chic eateries. An expanse of reclaimed wood planks laid in a herringbone pattern stretches across the floor from the entryway, along the length of white washed brick wall, and up to the sliding doors leading to the balcony on the far end of the open layout. 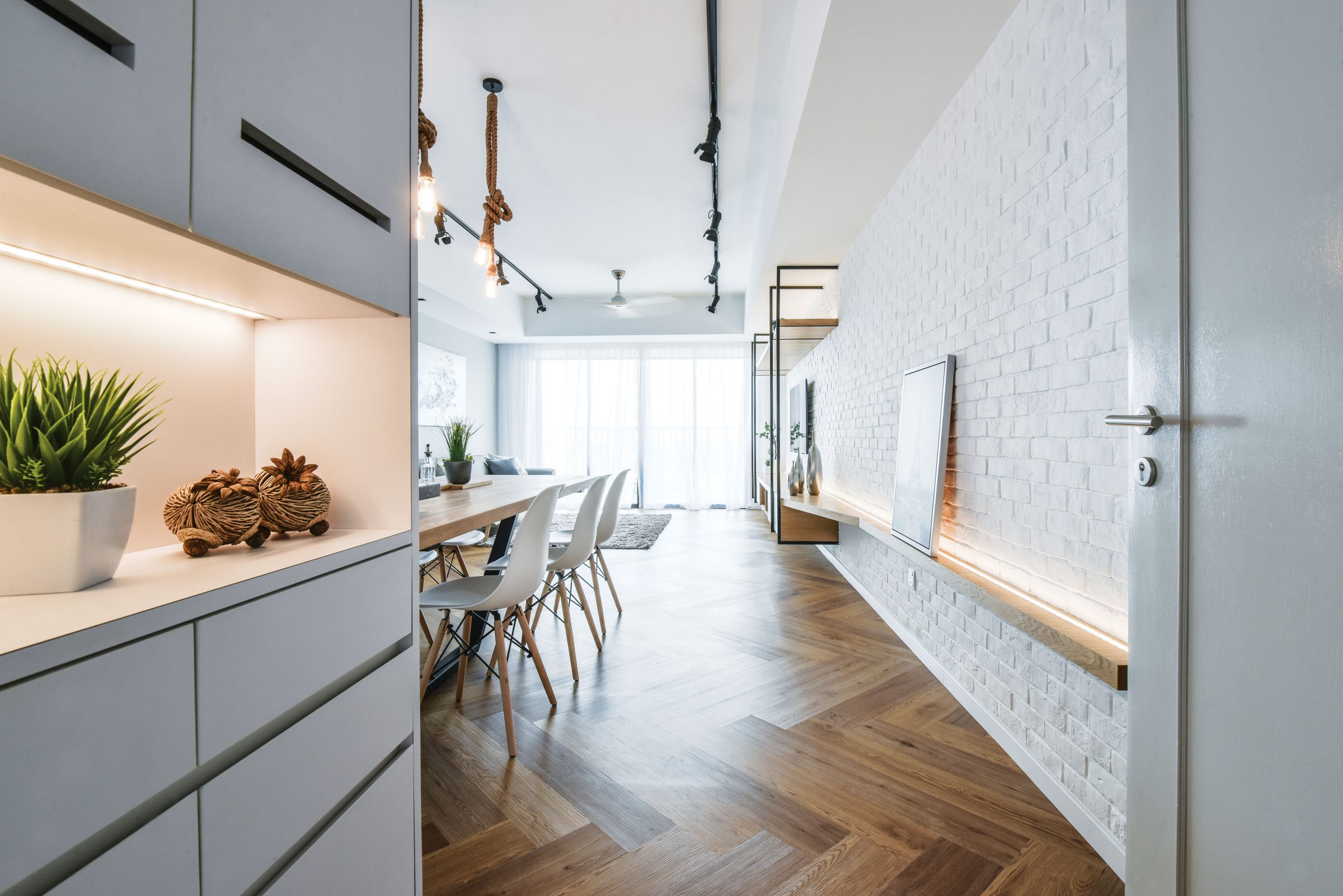 Stepping around the wall of white cabinetry at the entrance reveals a compact kitchenette with a dining surface projection. The dining surface is supported by a single trapezoidal steel frame, apparently conceived at the leading edge of space-saving designs. Accompanying the dining surface are six identical side chairs designed by Charles and Ray Eames: the Vitra DSW, a polypropylene and wood variation of the iconic fibreglass shell chair from the same minds. 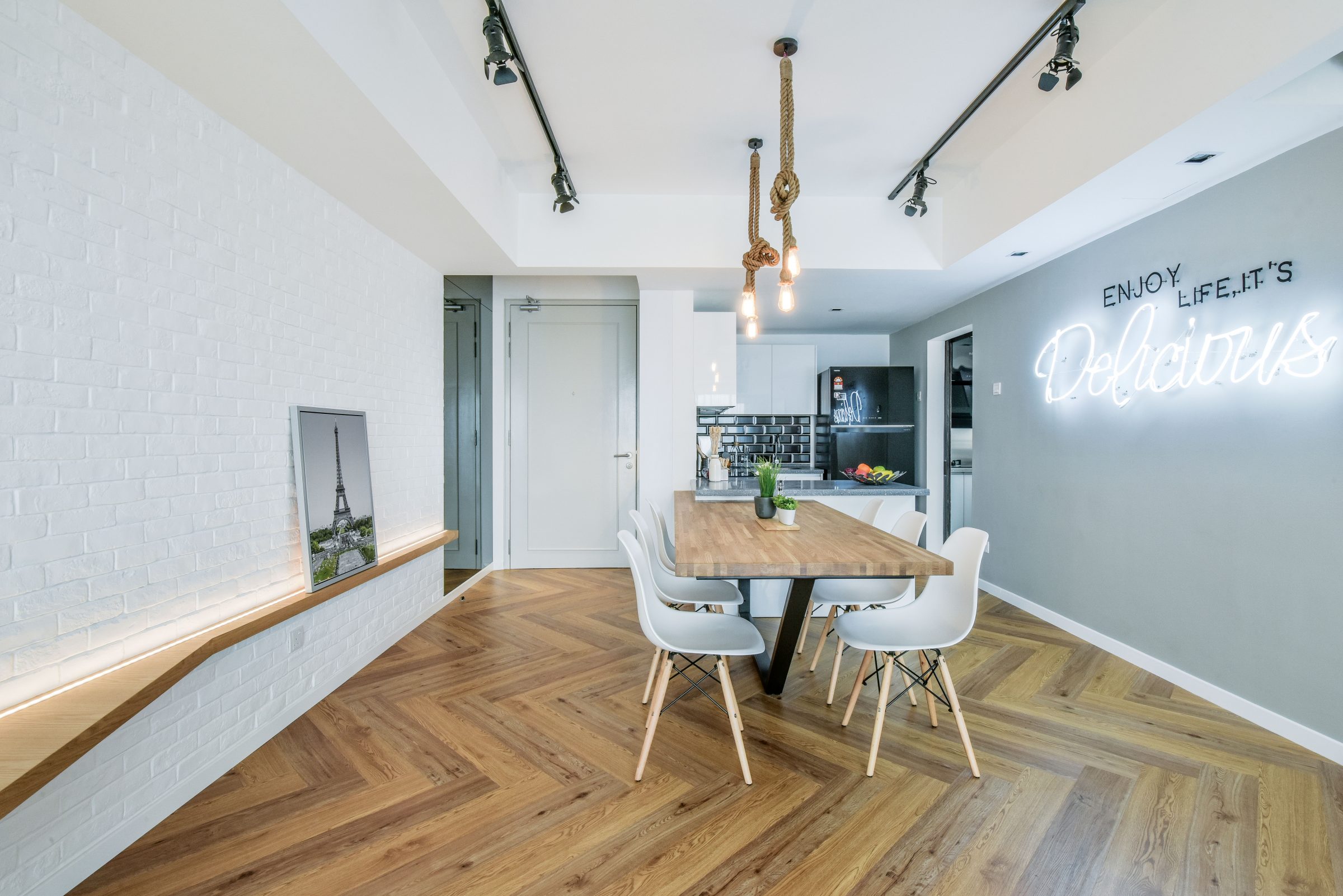 The café décor of the dining space is punctuated with some surprising decorative lighting fixtures: vintage pendant lights composed of exposed bulbs hang from the ceiling by lengths of low-gauge woven rope, while an Epicurean motivational message is expressed on the adjacent grey wall in a combination of floating metal lettering in black and neon lighting tubes for stark contrast. 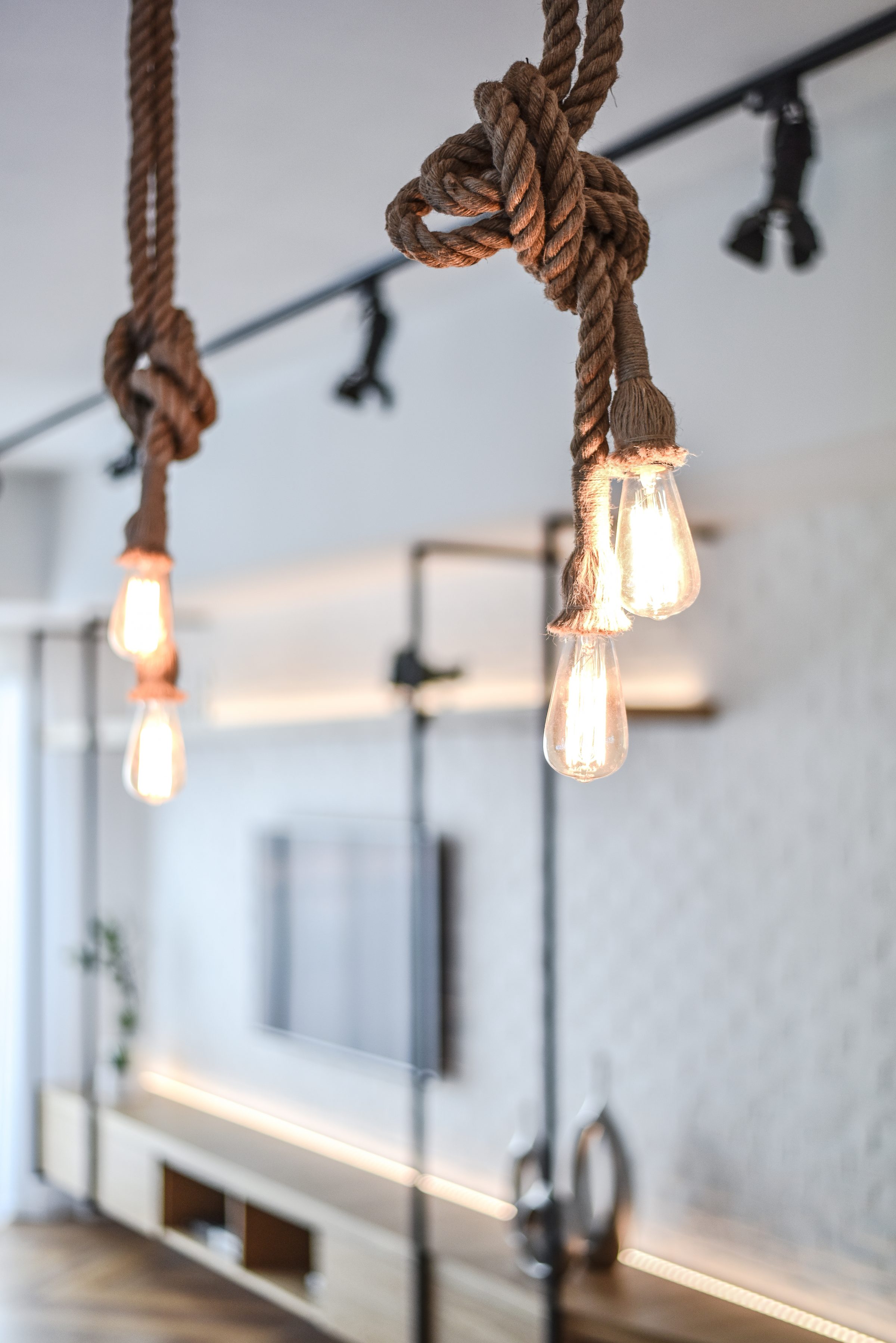 The length of whitewashed brick on the opposite wall hosts a horizontal stretch of wood in a shade that complements that of the wood floor and dining surface, its height mirroring the dining table, and its length stretching to the far extent of the seating lounge to serve as the console surface. A trio of minimalist frames appoint either side of the entertainment wall to divide the length of white into segments that reflect the functional areas of the open layout.

The aged wood is transported to contrast against the white ceiling with the repurposing of a wooden propeller seemingly appropriated from an antique aircraft that no longer needed it. 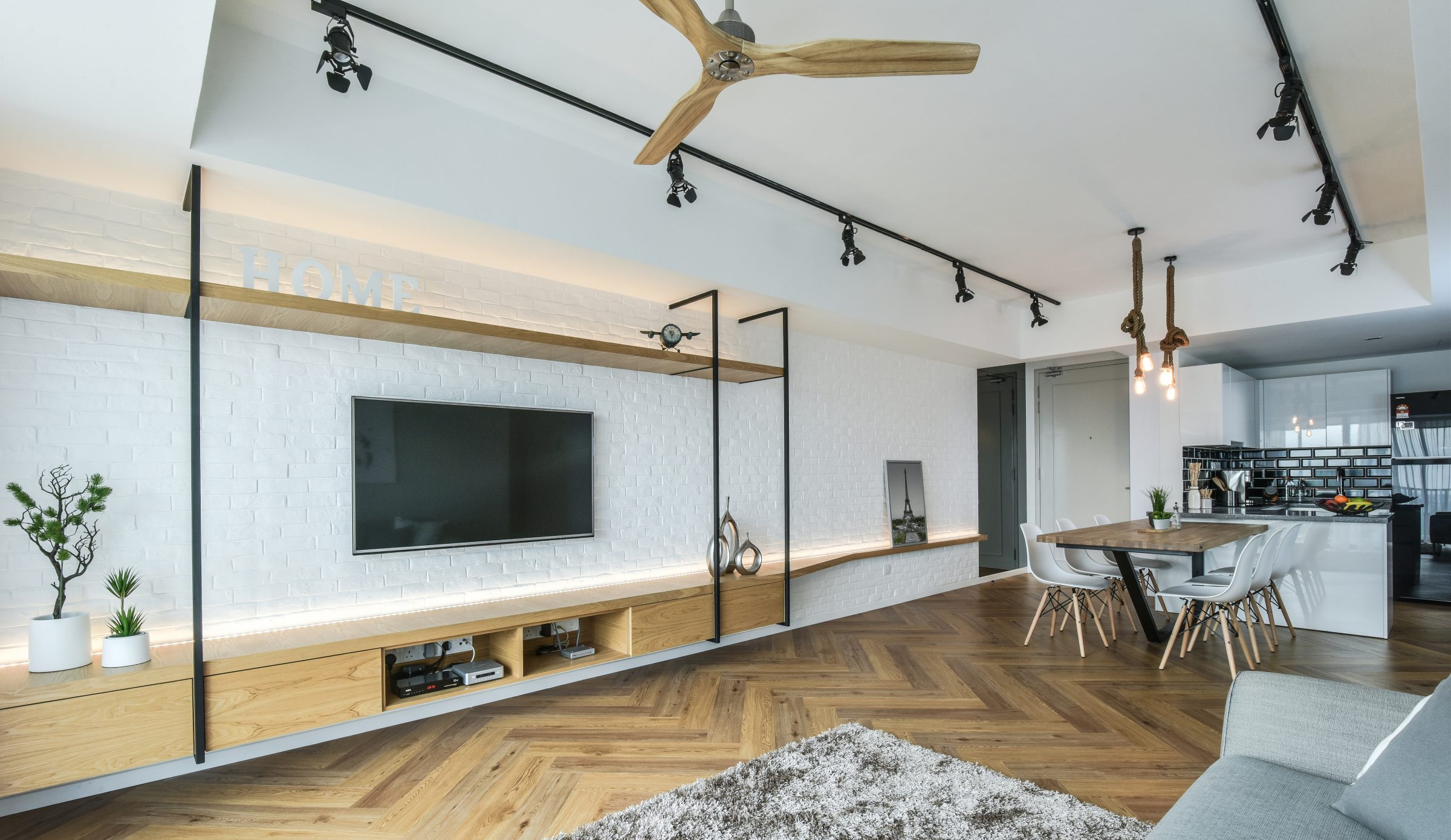 Minimalist Segments: The scant entertainment wall is flanked by simplistic frames of carbon-coated box steel, incorporated for the sole purpose of dividing the generous length of whitewashed brick wall into golden proportions.

This same echoing of wood occurs in the master bedroom – along with a minimalist construction of shelving situated opposite to the bedstead. The qualities of wood are applied in reverse in this space: where the herringbone pattern occupied the floor in the open layout of this condominium, the same pattern is limited to the bedroom door to make way for cleaner and newer wood grains laid on the floor in modern fashion. 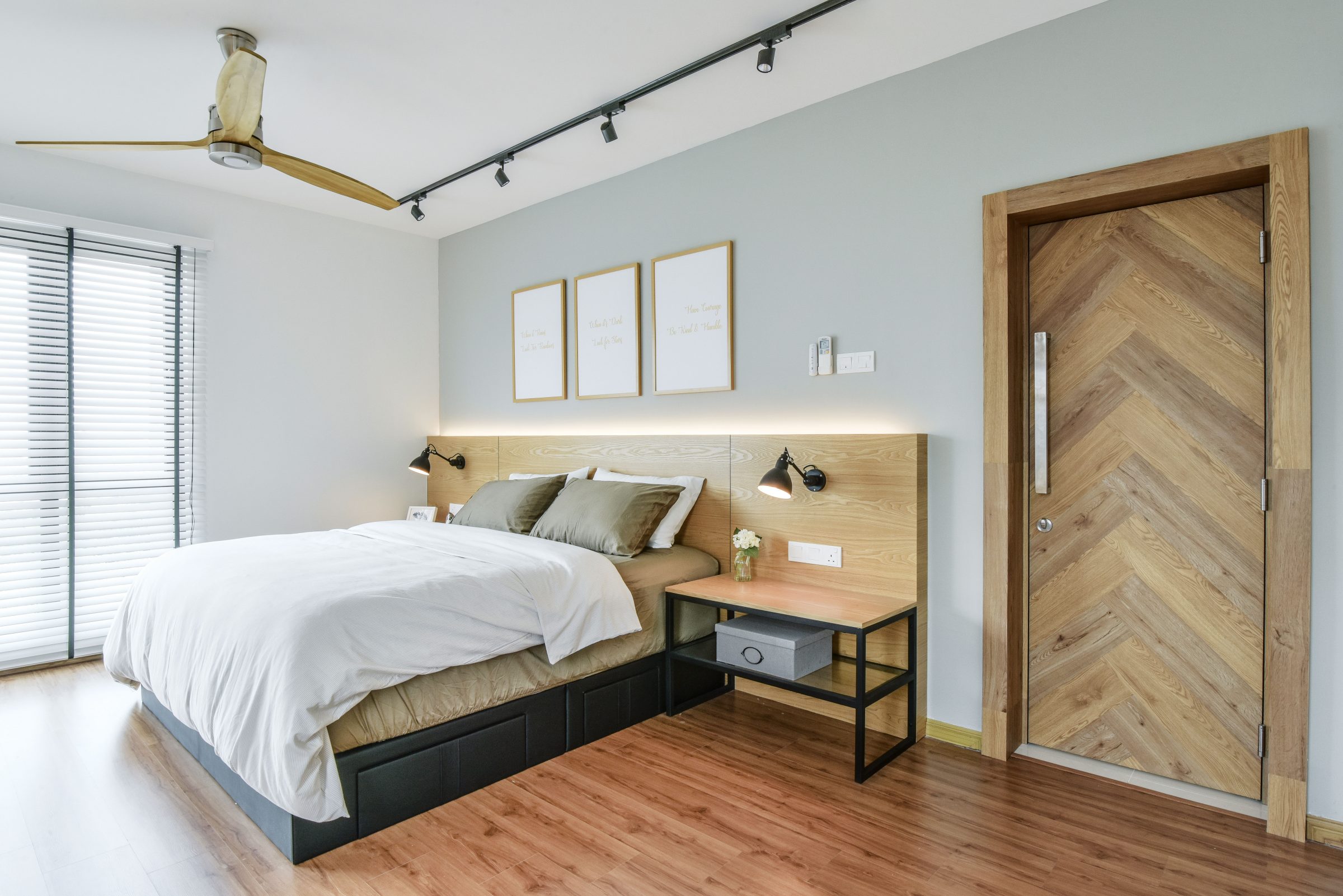 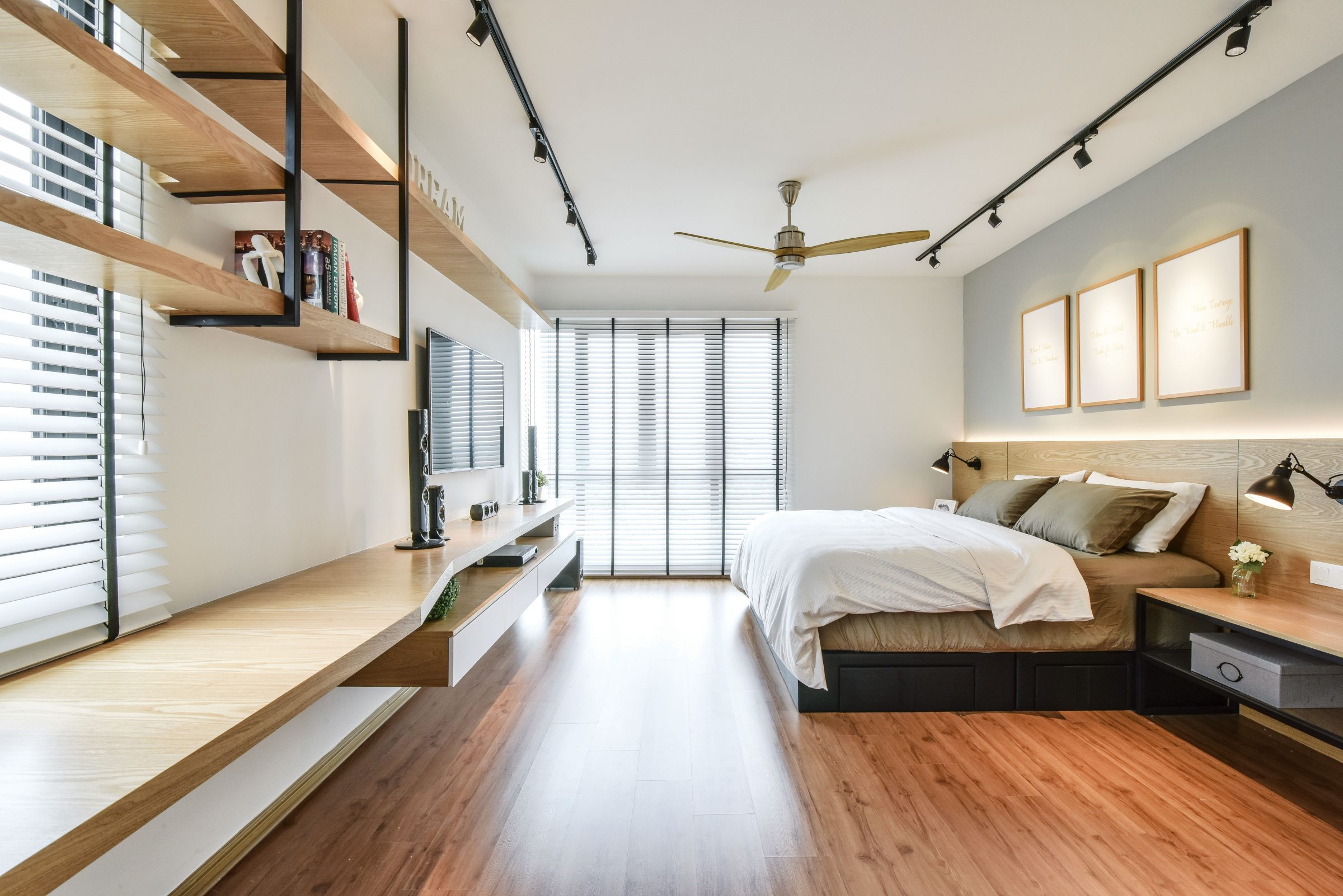 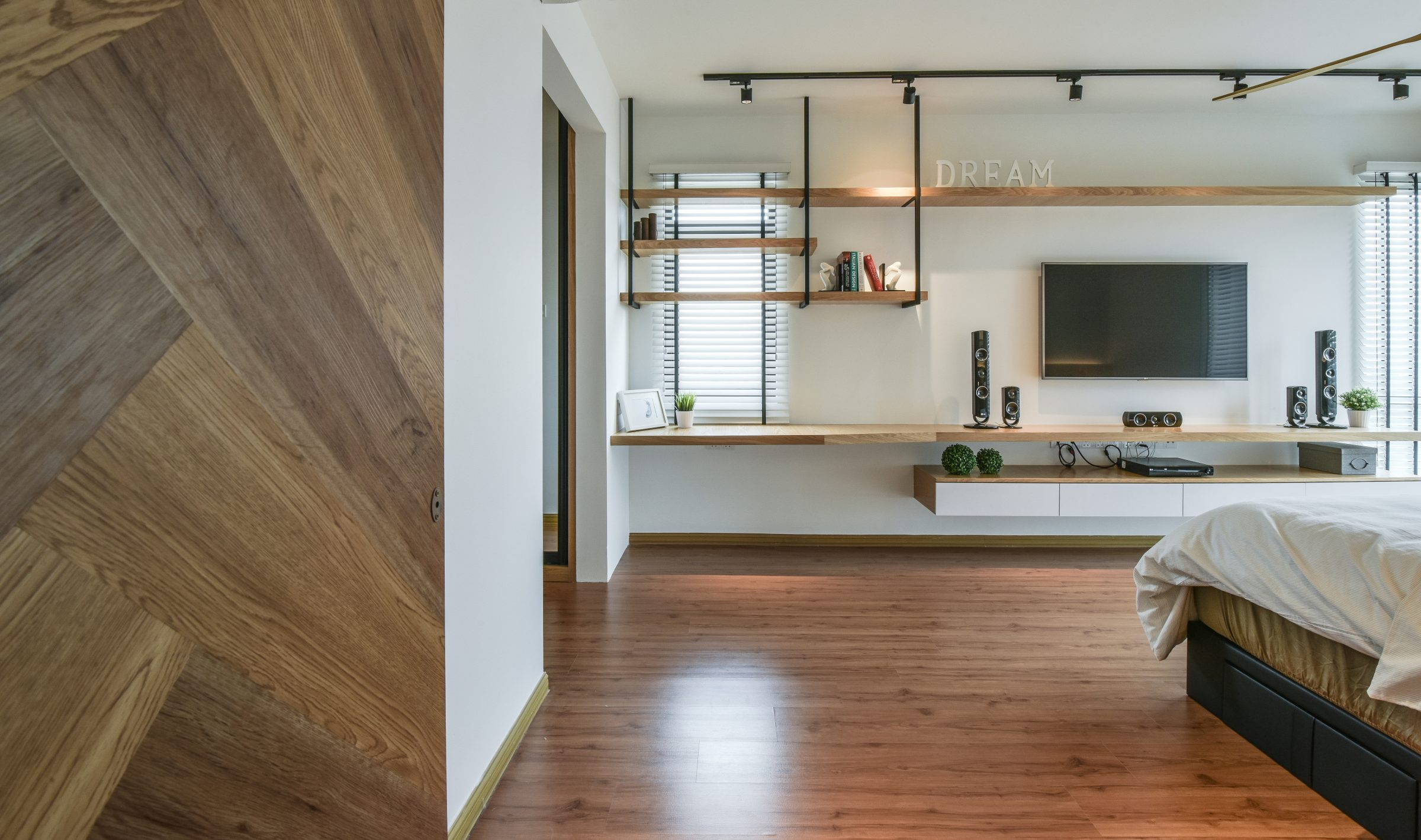 Established in the year 2008, Surface R is a Malaysia-based interior design firm that has grown from strength to strength under the leadership of its founder, Stanley Leong and principal designer, Sam Leong. The firm’s ultimate joy is to provide its esteemed clients with complete “head-to-toe” designs and gorgeously crafted projects. 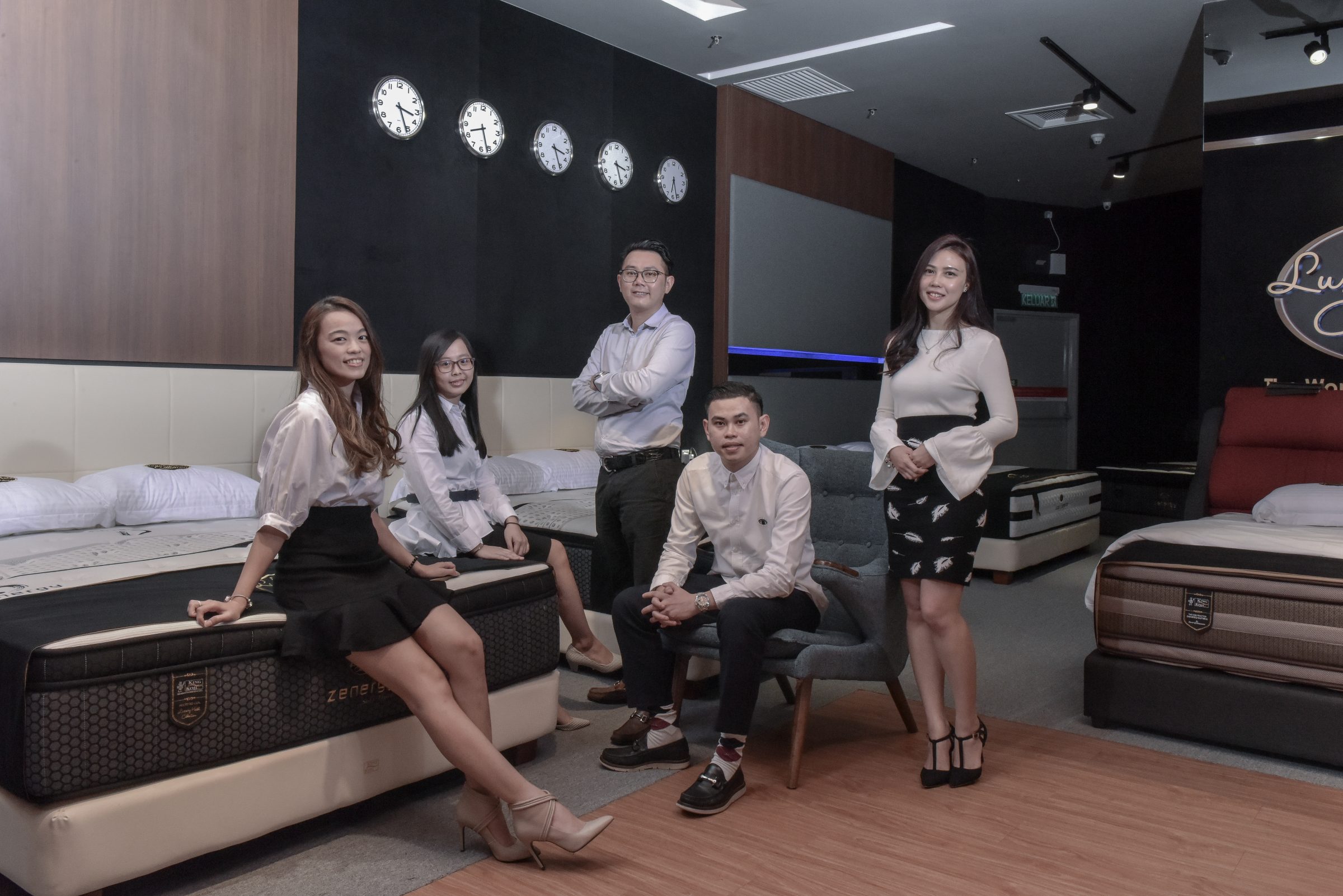 Luxurious Penthouse at Persiaran KLCC Takes on a... 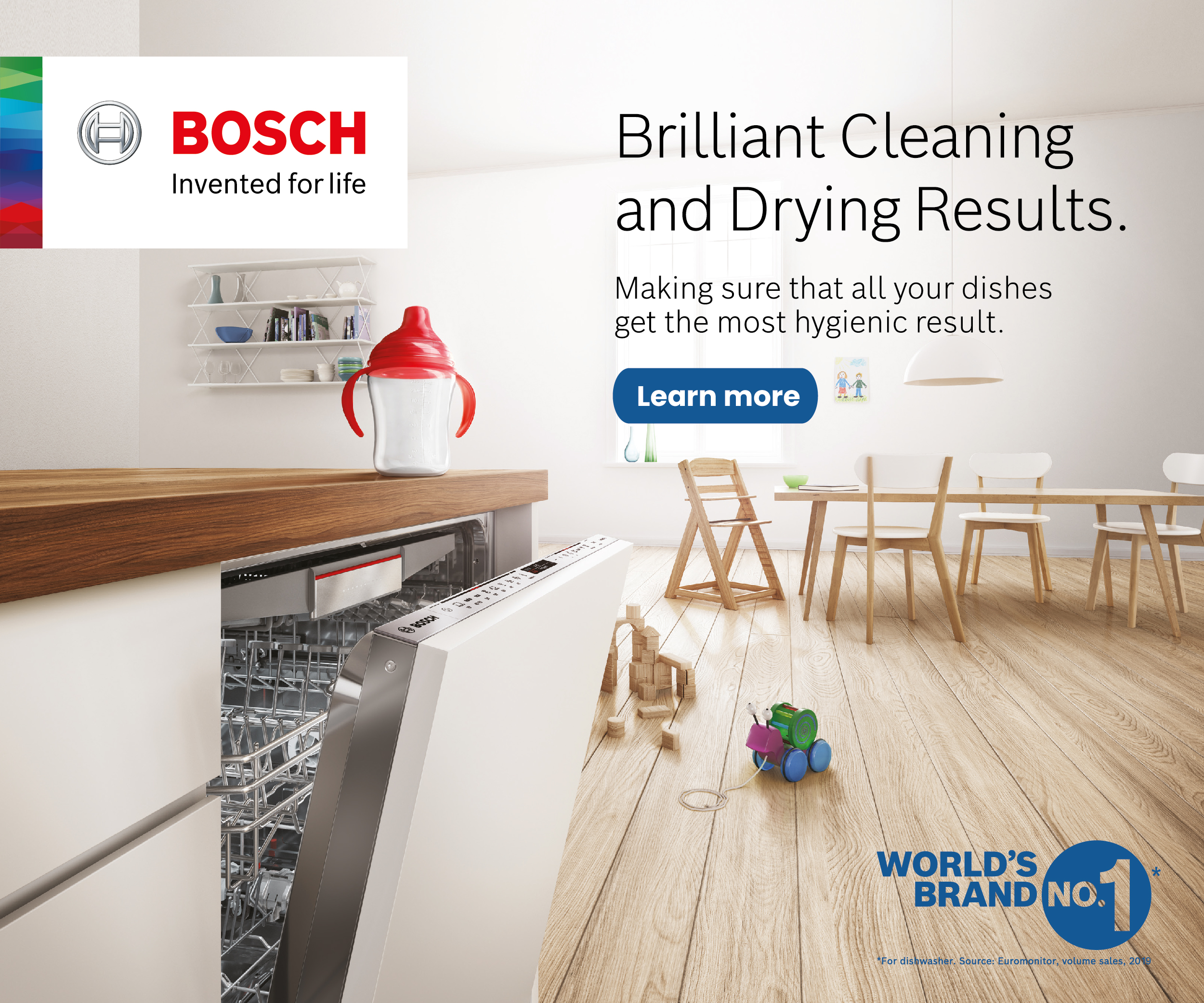 For over sixteen years, Creative Home X has firmly planted its roots as a prime home interior magazine in Malaysia, offering homeowners and design professionals alike plenty of design inspiration and resources to complete their spaces.